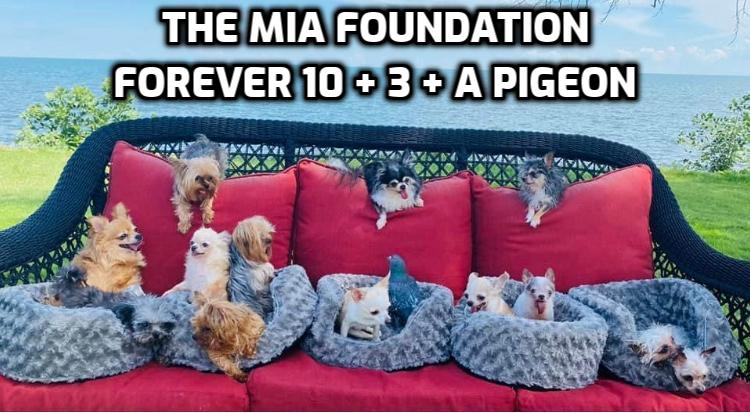 There is a quote by Lyn White that says “The greatest ethical test that we’re ever going to face is the treatment of those who are at our mercy.” There is no better way to describe Sue Rogers, founder of The Mia Foundation. I had the privilege to interview this human with the heart of a warrior who protects and cares for animals born with birth defects.

Have you ever had an experience in your life where you are faced with a big decision and made a choice that others did not understand or agree with, yet you knew in your heart it was what you needed to do. This is what happened with Sue.

On June 26, 2010 Sue’s Chihuahua Juliet, after an unplanned pregnancy, gave birth to three puppies. The first two puppies were delivered in the usual way. The third puppy was not coming out. Sue and her husband Gary took Juliet to the emergency veterinarian, waiting all day as the hospital staff tried various interventions to help Juliet deliver the puppy.  Eventually the veterinarian gave Sue two choices. One was to take Juliet home, wait until the puppy would be delivered and probably not make it or they would do a c-section where they believed the puppy would not make it either. The fetal heartbeat was so low the vet felt the puppy would not survive being born. Sue did not want to have Juliet suffer for days to deliver so she chose the C-Section. Sue briefly went home to drop off Gary when she received the call. The feisty pup had made it through the C-Section, was alive and also was born with a cleft palate. The staff at the hospital, due to the cleft palate, strongly suggested the pup be euthanized. In that split second Sue made the decision to say no, do not euthanize this puppy. I will take her home.

At home Sue researched how to feed a puppy with a cleft palate, finding little information. She did find out it was safer to tube feed pups born with a cleft palate because they cannot create a suction to feed from the mom. When Sue saw this puppy she fell in love and named her Mia. Sue quickly realized Mia would not feed from her mother because she could not and had the staff at the hospital show her how to tube feed Mia. From that point on every three hours Sue and Gary would feed Mia. If Sue needed to go anywhere, this pup who weighed a little over a pound, would travel along in her in the specially designed cozy incubator carrier.

A friend asked if she could begin a Facebook page about Mia and this page grew and grew and grew. People fell in love with this little pup who fought to live and gave such joy to all. Mia passed from this world on April 11, 2012 from aspiration pneumonia. After Mia’s death Sue began receiving cards, flowers, emails from all around the world. This little spunky, sweet, courageous pup had touched thousands of lives. This blew Sue away. She had not realized this beautiful pup gave love, hope, and inspiration to so many people.

What moved Sue to begin The Mia Foundation was the combination of a few things. Of the many heartfelt condolences she received there were three that struck a chord with her. One was from a young girl who said she had thought about committing suicide yet seeing Mia everyday fighting to live kept her alive. Another was from a man who decided he would seek treatment for his cancer because “if Mia could fight for her life he could too.” The third was from a  father whose child has a cleft palate could face the day at school, because of the courage Mia gave her, even though his daughter was treated unkindly by others.  Also Sue did not want any animal or person to go through what she and Mia did. Taking care of Mia was scary and lonely for Sue. While her family was supportive, there were no mentors who could help guide and educate her in how to care for Mia, no one for Sue to reach out to for emotional support. Sue was trying to care for Mia in the best way she could with little information. A few days before Mia died she had been sick and they were sleeping on the couch. Sue said to Mia your mission is complete. Three days later Mia died.

In the eight years since Mia died The Mia Foundation has opened the eyes of veterinarians, breeders, and people that special needs animals are worth the effort. That these animals deserve a chance to live. Sue has a core group of people that help her with the foundation. Sue has gone to teach veterinarian students at Cornell about animals born with birth defects and how they deserve a chance at life. She will mentor people who contact her if they want guidance for a special needs animal, take in animals people surrender, and go speak at schools with McFly (born with no front legs) and MacKenzie (born with a cleft palate) to show kids what is possible. To share that just because you are born differently doesn’t mean you should be treated differently.

The Mia Foundation, which is a 501(c)(3) nonprofit, has rescued and cared for over 1000 animals born with birth defects. Three to five times a week they get a plea to help a dog. These special animals give back in so many ways, providing comfort, hope, healing, and unconditional love. Take for example Miguel, a forever foundation dog, who was born with no front legs. Miguel gave inspiration to a Veterinarian in Virginia who lost both of his legs. There is superhero magic in how these animals can touch so many lives. The Mia foundation has always been able to provide the money needed for any medical needs of these animals due to the generosity of so many humans.

Sue said at times it can be difficult for her because of the comments some people have said about these animals and the work the foundation does. When this happens she looks to the many lives these special animals have touched. The hope and healing that occurs because of these animals are in the world. When I asked Sue what pearls of wisdom she would share she said “Life is short. Don’t do things that don’t bring you joy.”

It is such an honor to share this story about The Mia Foundation. It seems that Mia needed to live in the home of a special person named Sue Rogers. So that Sue and these magnificent special needs animals could carry on Mia’s legacy of hope, healing, inspiration, and love. A gift we all need right now.

“When I look into the eyes of an animal I do not see an animal. I see a loving being. I see a friend. I feel a soul.” A.D. Williams

0 comments on “The Mia Foundation”